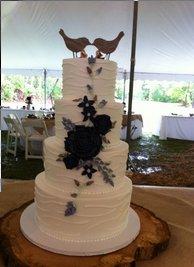 I wanted to let you all know about an experience I had with the cakesafe. It was just last weekend when mother nature decided to let it rain for two days straight here in Louisville and cause flooding. Well, Saturday I had to deliver a buttercream cake in the wet weather, not to mention humidity, to an outdoor wedding and reception. I thought the rain would take a break and let up, but I was wrong. We got to the reception site which was in a backyard and so far away we couldn't see the tent from the street. I had to get out of the car to find where this cake was going and after a long muddy walk down some hills I finally reached the tent. As I spoke with the groom he told me if the car gets stuck they have a tractor to pull us out. During all of this I was never once worried that the cake wouldn't make it to the table. So I go back up to the car and tell my mom we have to put the car in four wheel drive to get where we are going (she was driving). Her worry was that the car wouldn't make it, but we had to do what we had to do. We proceeded to drive the car down the hill, through the mud, around logs. We got the cake out while it was pouring and walked it through the mud and finally under the tent. It made it in one piece and without a drop of water on the cake. It was fully assembled through the process with the decorations on it as well. If I didn't have this there would have been no way to assemble and decorate the cake on site with out a disaster. When it was all said and done my mom told me she wasn't worried about the cake because it was in the cakesafe, "why else would it have that name?" And my mom is a worry wart about cakes!!! Thank you so much for this product and saving the day from mother nature and a little off road adventure. In the picture you can see the standing water in the background.